DK <qumran> | Between The East and the West
music and architecture

DK <qumran> is an interdisciplinary audiovisual series of works that combines live visuals, architecture and music. The show consists in real-time generated visuals and electronic music (live and fixed media). Music is reproduced through a set of speakers surrounding the audience in order to recreate the spatial feeling of the real spaces.

Both video and music are based on the architecture of Bodegas Qumrán (ES). The winery is located in the prestigious Golden Mile of Ribera del Duero, positioned on a small hill with gentle and sunny slopes called El Cerro de las Bodegas, surrounded by a vineyard of 4,5 Ha. The building, a work by the Spanish architecture studio Konkrit Blu, is an impressive concrete construction, which successfully combines futuristic design and the tranquil, timeless beauty of Castilian wine landscapes.

Moved by the astonishing design of this building, The DK <projection> decided to carry out an audiovisual project based on 3D visualizations, characterized by geometry and an acute sense of spatiality, which relates to the design of spaces and artifacts. On the other hand, Ángel Arranz’ main interest resided in utilizing measurements and proportions of the south-façade of the building in order to create the structure of the instrumental pieces, as well as sound features captured ad hoc inside the building in order to establish a primeval material for the central tape. The project tries to merge these spatial expressions, images and sounds, creating a unified work.

Qumran for live visuals, bass saxophone and electronics is a work that coheres three artistic realms, taking architecture as a starting and final point. This coherence in concept and material strives to create a unique experience for the public: real-time astonishing abstract videos, the spectacular scenery of a bass saxophone player and a PA system surrounding the audience.

De la luz y del espacio is a tape with video projection based on two key concepts derived from the interiors of Bodegas Qumrán’s building by Hernández/Solís. The first concept is light undergoing a very studied program, turning into constructive matter, such as glass and concrete, thanks to its rich functionality. The second concept is the architectural program in its strict sense, which aims to fulfill the building’s practical requirements, those of a factory, as well as the continuity of the main material, concrete, which re-adapts its interior volumes, generating poliedric gestures and inviting the visitor to perceive rich acoustic spaces. This is so partly because of the resonating characteristics of the concrete and partly because of its volumetry.

The piece takes as a model the resonances of the real spaces, recorded by the composer self. To this end, a glass of wine was used as a resonator by introducing inside a small microphone. This noise-silence captured by using naturally amplified resonators was taken as a metaphor of light translated to sound. So do video animations. These are based on the real 3D model of the winery. Few colors were used in order to enhance the quality of shapes, while the duality between light and space is represented with the colors black and white.

Qumran B for live visuals, percussion set and electronics is the last and third piece of DK <qumran> series. To a certain extent, Qumran B is the contrastive piece of Qumran for saxophone in this cycle of pieces.Resonating according to the own aesthetical ideas of the building, in the DK <qumran> cycle there is an idea of opposition/syncretism between Orient and Occident. As while as Qumran for bass saxophone aesthetically works around the idea of Orient, Qumran B is focused on Occident. 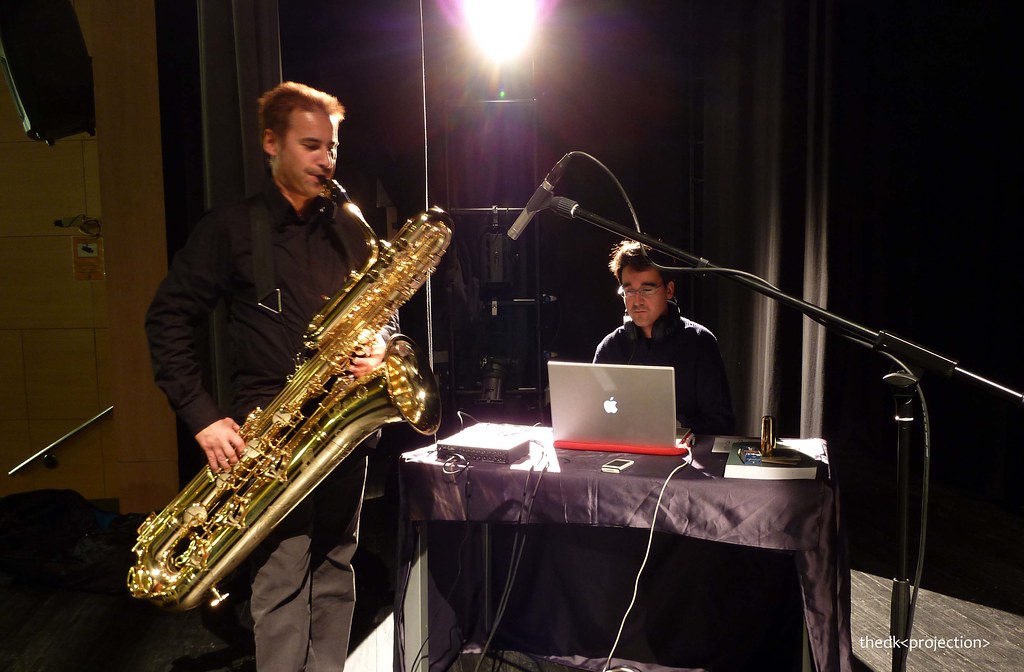 Dismantling (itself) the time