Coinciding with the beginning of the grape harvesting in the Ribera del Duero, on the 26th september avant-garde sounds and images inspired by the architecture of Bodegas Qumrán will be heard in the Cultural Center of Peñafiel (Valladolid). The audience of this recital will assist to the preview of the series DK <qumran>: Between the East and the West. The author of this work is Ángel Arranz, Spanish composer, sonologist and musicologist born in this same city and living in The Netherlands. He is an associated researcher at the Institute of Sonology in The Hague, as well as artistic director of the multidisciplinary collective The DK <projection>, who will be in charge of carrying out this innovative event.

The concert, sponsored by Bodegas y Viñedo Qumrán and made possible with the collaboration of the Peñafiel City Council, will start at 20:30h. This preview concert will be the colophon of a documentary produced and filmed the previous days by The DK <projection>. 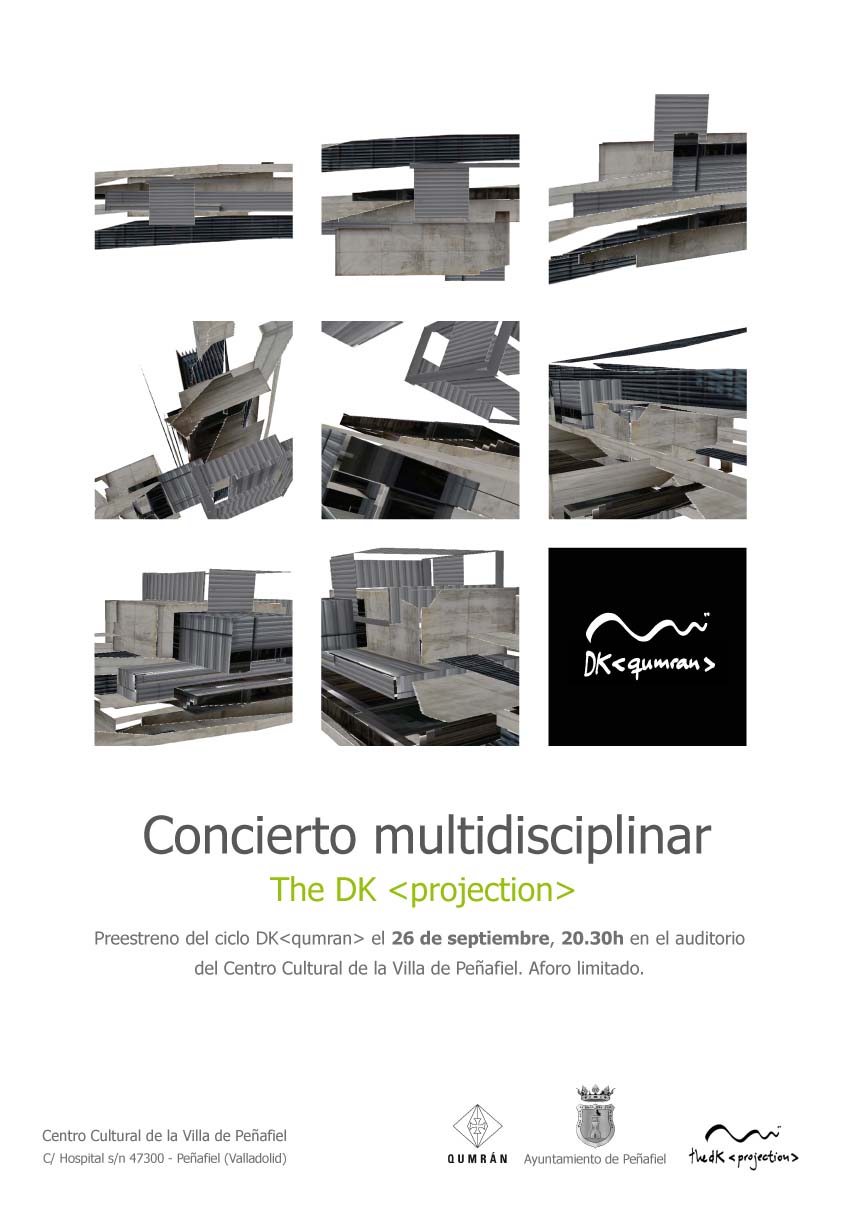 DK <qumran> is  a monographic multimedia show consisting on three music compositions by Ángel Arranz inspired by Bodegas Qumrán. This avant-garde winery situated in the Ribera del Duero area has been designed by the Barcelona-based architecture firm Konkrit Blu. In this recital of instrumental music assisted by electronic media will perform international artists and soloist of wide renown such as the saxophonist Josetxo Silguero and the percussionist Raphaël Simon.

In words of the platform self, in this wide-range cultural event, “the dialogue between architecture and music proposed by Konkrit Blu and Ángel Arranz aims to continue an universal artistic tradition still to be further explored in the history of Spain”. They say that “this path starts in Florencia en 1436, with the collaboration between the architect Filippo Brunelleschi and the chapel-master Guillaume Dufay, and it is not realized again until the 20th and 21th centuries”, with scarce examples such as the collaboration in 1958 between the architect Le Corbusier, the composer and architect Iannis Xenakis and the composer Edgard Varèse in the Phillips Pabilion in Brusels; the piece Prometeo by the composer Luigi Nono, created with the contributions of the architect Renzo Piano in 1984 and performed in Venice and Milan; or more recently in 2004 with the artistic tandem formed by the architect Lars Spuybroek and the sound artist Edin van der Heide for the creation of the interactive sound installation Son-O-House in the small Dutch city of Son-e-Breugel.

The firs piece of this series, Qumran for saxophone and electronics, will be premiered on the 19th november thi year with occasion of the 23th International Electronic Music Festival Punto de Encuentro in Valencia (ES).

Filming of a documentary

Also, between the 19th and the 27th September in Bodegas Qumrán and the Cultural Center of Peñafiel there will be filmed the documentary entitled Qumran: a Multidisciplinary Exploration of Space, produced by The DK <projection> and sponsored by this same winery. This documentary explores the multidisciplinar relationship among music, architecture, digital arts and wine-growing through Ángel Arranz´s works and Bodegas Qumran´s architecture. Arranz takes the south façade of this building as an abstract mathematical model to create his three compositions, using a personal poetic.

Bodegas Qumran is one of the most innovative buildings in the Denominación de Origen Ribera del Duero. It was short-listed in 2010 in the category Young Architect of the Year in the Leaf Awards in London.