[d]espacio is a series of electronic pieces with visualizations composed by Angel Arranz. The series is inspired on the buildings of four Spanish avant-garde wineries: Bodegas Protos, Bodegas Marqués de Riscal, Bodegas Ysios end Bodegas Qumrán. There is exactly one month left for its premiere in Salamanca and in the Dutch city of The Hague, so we would like to speak about the first piece of the series, entitled  Electronic Study. This piece has been composed by drawing… wait, by drawing?

HighC is an intuitive program implemented by the French ingeneer Thomas Baudel. This program is based in a hardware device developed in 1977 by Iannis Xenakis, a Greek composer and architect, considered one of the most outstanding composers of the second half of the 20th century.  This invention was named UPIC ( Unité Polyagogique Informatique du CEMAMu). UPIC was a computer device which allowed you to literally draw a series of gestures on a panel by means of a light pen. A computer registered such gestures digitally and transformed them analogically in sounds. The horizontal dimension of the plane represented Time -the sounds´ duration and location- while the vertical dimension represented the frequency of such sounds (higher or lower in pitch). The user could choose in a sound bank different timbres and wave types, as well as the envelope, that is, the amount of volume and how a sound starts and ends.

Arranz used HighC to create this piece in 2009, inspired in the building of Bodegas Protos by Richard Rogers. To that end, he takes as reference the paraboloid shapes of each of the building´s five vaults.

From these shapes, the composer developes a personal gesture which oscillates in time starting from small strokes (drawn in green in the picture above). The gesture changes gradually and becomes thicker, adquiring a delta-shape in its beginning and ending. This delta represents the building´s triangular plan.

The set of oscillations ending in a cloud has been named by the composer as seed/anti-rythm. In this sense, Arranz represents Protos´ building as a anti-rythm, but in a very personal way.

If we zoomed the cloud zone of the original drawing, we would realise that each tiny element showed there has been made imitating the seed/anti-rhythm: 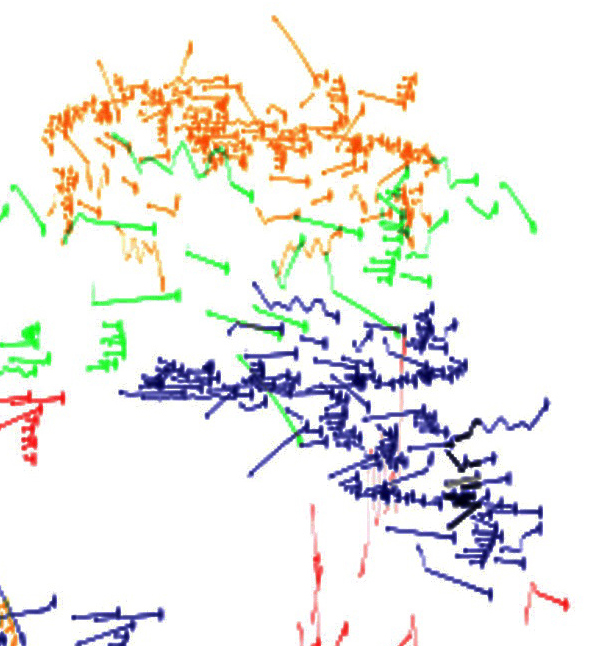 The piece dedicated to Protos is the first of the [d]espacio series, as protos (in greek,  πρῶτος) means first. In addition, Electronic Study is the generator of the three following pieces, based on the buildings Marqués de Riscal, Ysios y Qumrán, and entitled, respectively, Extrusion, SAH y De la luz y del espacio. Many of the gestures used in Electronic Study come back in an evolutioned, transformed shape, in the three following pieces.

Electronic Study was presented separately in April 2009 in the Discussion Concert Series of the Institute of Sonology in The Hague.