Today was the first rehearsal day with Raphaël, so the activity temperature has increased a degree. Early in the morning we made our way to the local radio station to begin the promotion of our concert in Peñafiel and province. The journalist María Alonso, from Radio Peñafiel, was in charge of conducting the interview. Besides being a resourceful woman, she made us feel at home in front of the microphones. Even Raphaël ventured to intevene a couple of times in English, with simultaneous translation by us.

Later on we headed directly to the theater´s rehearsal room to examine the percussion instruments. This was also an opportunity for Raphaël to get an idea of the quality and current condition of the instruments available at the theater, of which we had been sending him photos some days before via email, so that he did not have to carry so much luggage. Some days before we had been doing a logistic study at several levels. Finally, we managed very skillfully to get one third of the theater´s material, the other third part was produced by our friend Manolo Cardona, and the final third was the instruments Raphaël himself brought with him from Strasbourg. 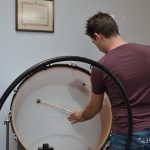 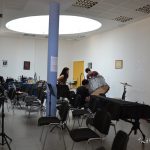 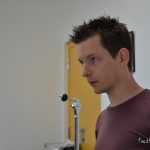 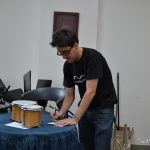 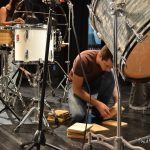 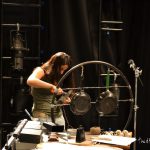 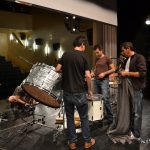 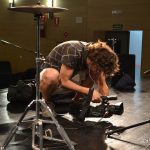 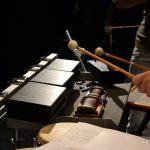 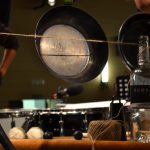 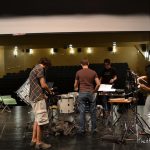 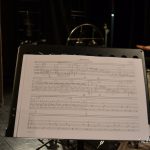 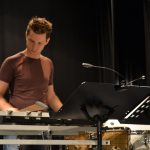 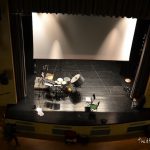 When we had checked all the instruments, Raphaël gave his approval, so… to the concert hall we went, very happy, to install the whole set! The thing took quite a while, as we had to perform several adjustments. We all worked on this, including Justi the Great, who helped us a lot, as you can see in the pictures. Nota bene: in the picture taken from above in the theater, the feet standing out on the left, these are all that remained of Raphaël after installing the whole set.

We had time enough to rehearse the piece, set up the audio, video and recording equipment, in the FOH as well as on stage, to test some electronics, even to devour some squid with its mandatory beer at Restaurant Chicopa!