Festival SON – musicadhoy became a sort of milestone in our path. Last March 9th, this important festival in Spain dedicated a whole concert to Ángel Arranz’s music by world premiering sonic architectures. This ongoing series of pieces, started in 2004 with the composition of Esquirlas/vacío for piano and electronics, is based on four avant-garde buidlings in Spain (Bodegas Protos, Hotel Marqués de Riscal, Bodegas Ysios and Bodegas Qumrán), designed respectively by four renowned architects: Sir Richard Rogers, Frank Gehry, Santiago Calatrava and Konkrit Blu Arquitectura. Probably you may know more about it here. The presentation resulted in a technically impeccable combination of three 8-channel tape pieces and three live electronics pieces, much of them with video projections.

sonic architectures is a series in which you could combine different pieces in order to make a whole, just in the way of raising up different sound constructs along a timeline. In turn, each piece belongs to different series of pieces, according with the architectural model used for their compositions. For instance, there is a series of three works entitled DK <protos> , another named DK <qumran> , an acousmatic series called [d]espacio, and so on and so forth. In fact, these series conform independently groups of pieces, which could be performed as coherent, separate recitals in a concert situation. In progress is still two of the series to be finished between 2014 and 2015.

Thanks to the great support of musicadhoy and of course the crew of La Casa Encendida, really diligent during the setup, rehearsal and concert time resulted smooth. From our very first minute in Madrid, Rebeca Largo made our visit extremely pleasant.

Once we arrived to the concert space, the patio of La Casa Encendida, we started to work to recreate the setup we planned few months before. We had in front of us four different setups to be developed in only two days, so you really have to be really tidy if you want to extract some meaninful variety by presenting every proposal really solidly. Concerning to the first set, sonic architectures, we used almost all the technical elements from the venue. In order to take advantage of the room features, incredibly high spaces, we created a sort of double quadraphonic set, probably inspired by our previous concert at Quincena Musical de San Sebastián: one exterior set positioned just close to the corners at 4.5-5 meters height, and one interior set just surrounding the audience, at circa 2 meters from the floor. It is interesting to have this feeling of interior/exterior sounds, specially when you work with the distance sensation respecting to the audience. People from LCE sound department really did their utmost on perfectly positioning the speaker system as specified by not letting one single detail of our rider loose. Nina Kraszewska did an incredibly nice job by programming and handling the mixer control, patching a really complex sheet of instructions. Each one of the pieces was independently demanding in this sense. 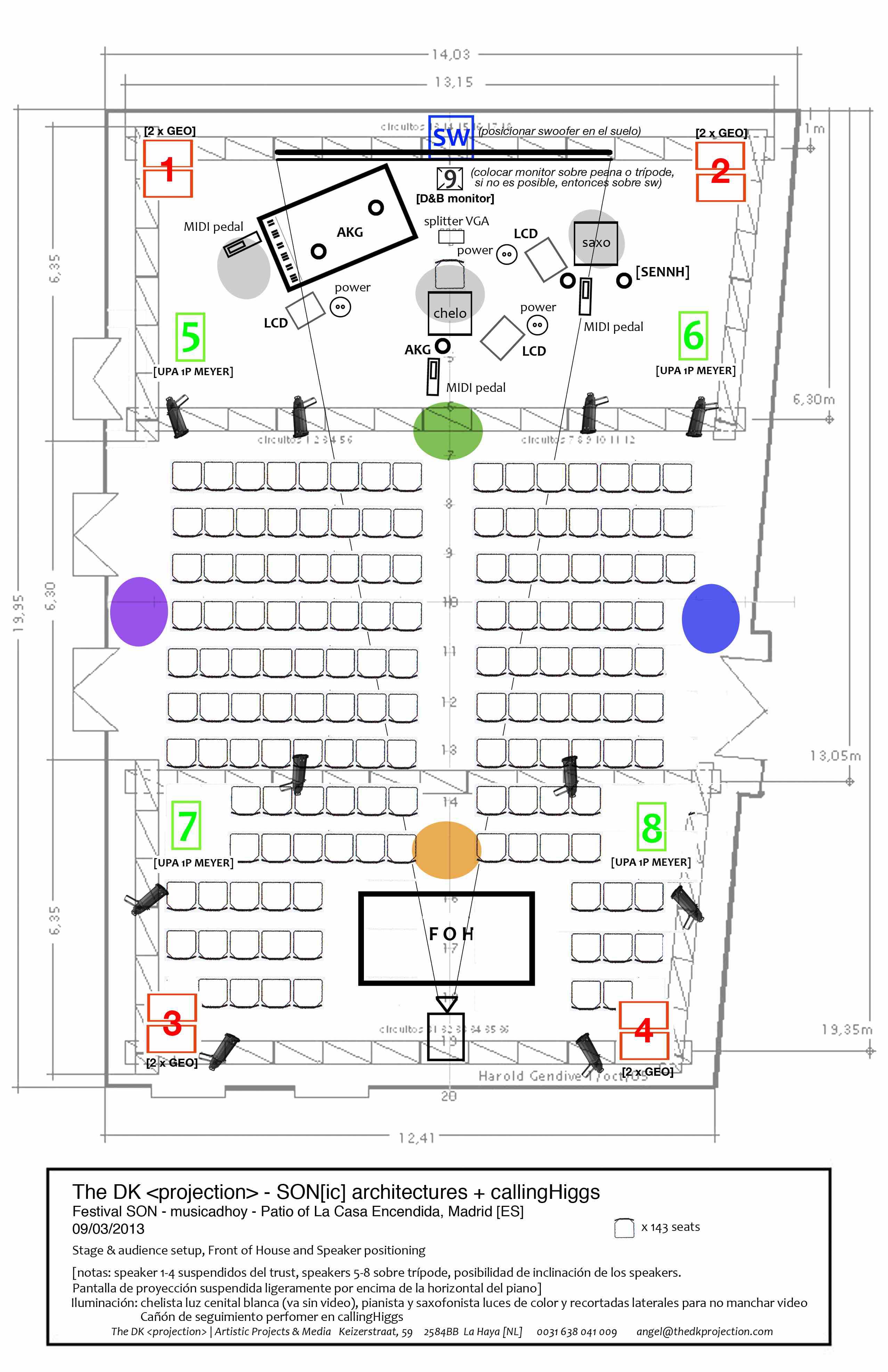 It is not frequent, at least according to our humble experience, that you find three comitted musicians at the same time with the same purpose: to get really intelectual, emotionally deep into one’s music. I think the group conformed by Akane Takada, Josetxo Silguero and Ralph Krause represents something like that. Akane’s performance was the first with us and her performance was superb, understanding Esquirlas/vacío for piano and electronics in a very personal way, dualing a sort of combative and hiper lyrical character at the same time. We got breathless during the rehearsals and concert, bravo. Josetxo made a mature version of Qumran, for bass saxophone and electronics; each time I listen to Josetxo to play this piece, I find something more and more atemporal, time-dissolved atmosphere, just the reallly flotant listening that I really wanted during the composition, planned as a kind of traveling from solid matter (concret) to the lightest of the elements (light), represented in the architecture designed by Konkrit Blu Arquitecture. The case of Ralph Krause is really special, it deserves a brief remark. First time he performed Punto Intenso contra Remisso was Salamanca, 2005, Spring time, that was the world premiere. Three years later, Spring 2008, we met again in The Hague; five years later, Spring 2013, following a perfect logarithmic interval sequence, we met in Madrid in order to do again a pendant version of the piece, that is 8-channel diffusion with live electronics written parts, unplayed until the date. it seems that certain development has been worked, as Debussy said, in complete ausence, in silence, during all these years!