A matter of adaptation

Last 29th of August we took part in the Contemporary music series of the Quincena Musica de San Sebastián, together with the saxophone player Josetxo Silguero. This concert centered around the bass saxophone (althought this was not the only representative of the saxophone family), and of course, around electronics and video creation. For us it was an inmense pleasure to work with such a great professional and sound craftsman as the engineer Juanan Ros. 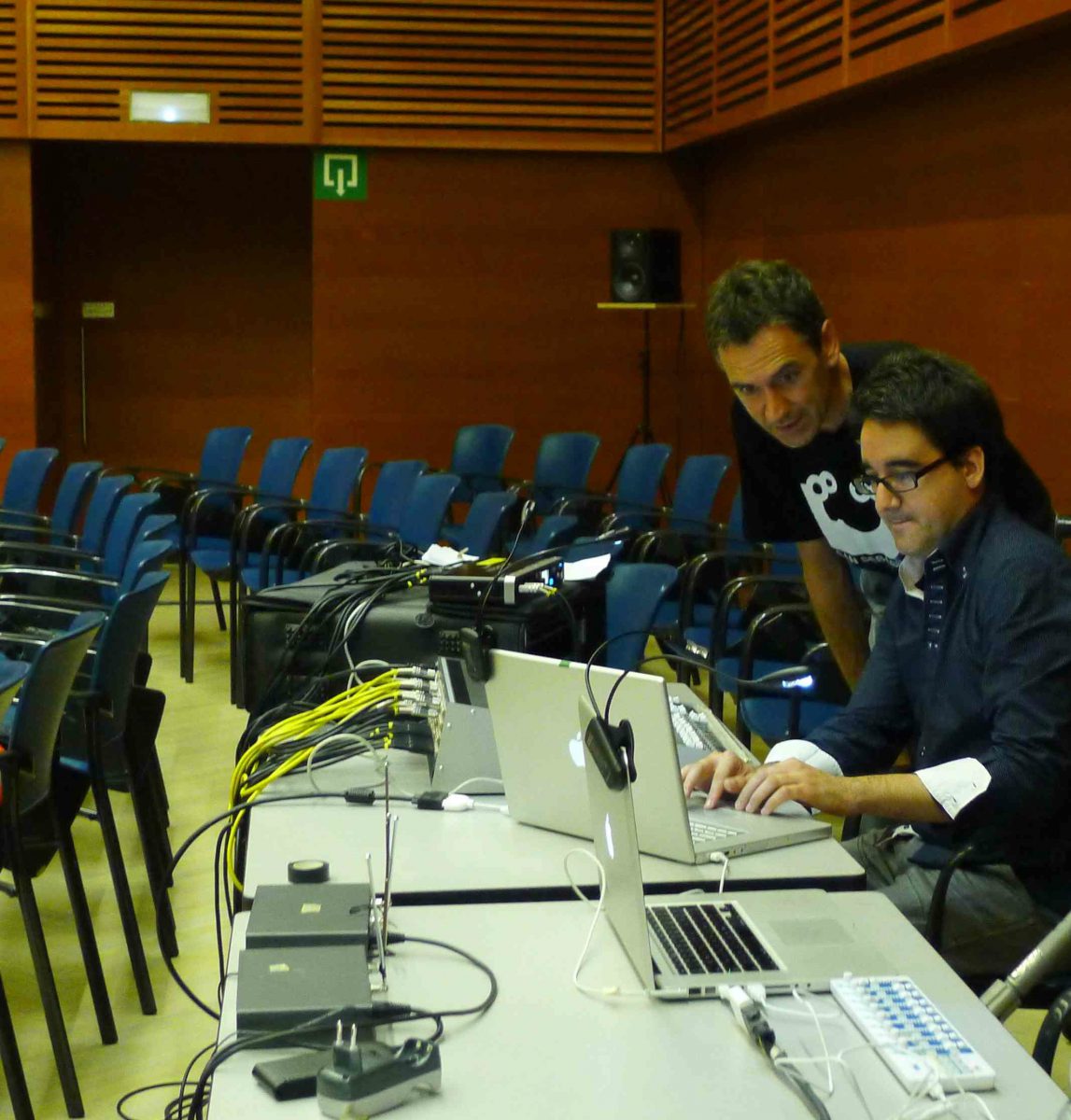 The recital was made up of pieces by Grisey, Bedrossian, Arranz, Ibarrondo, Quislant and Posadas. Only two of the six pieces of this recital featured electronics: Fúlgida niebla de sol blanquecino, for bass saxophone and 6-channel electronics, by the composer Alberto Posadas, and Qumran, for bass saxophone and 8-channel fixed/live electronics, by the composer Ángel Arranz. This last work was also combined with the projection of improvised and fixed videos. 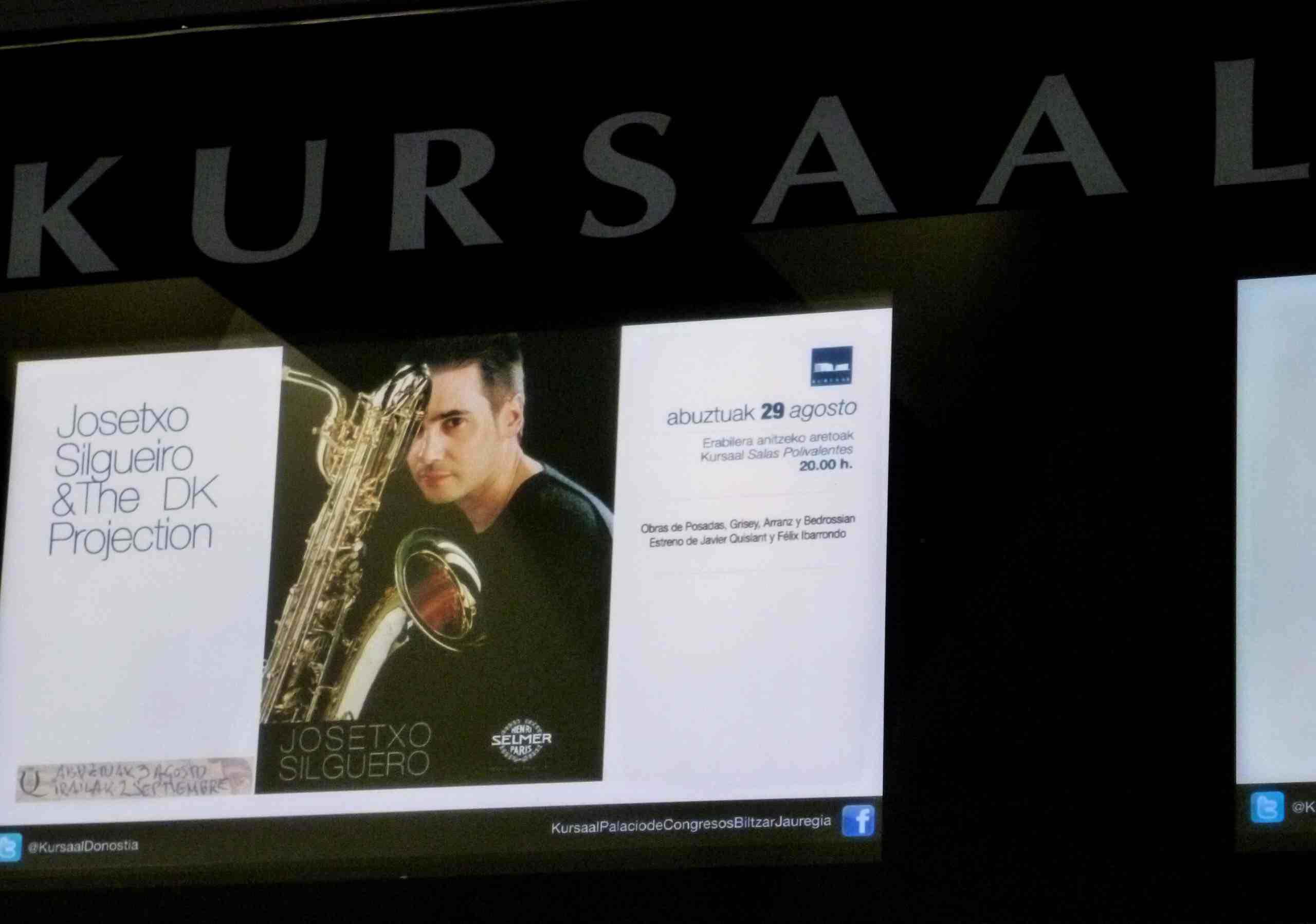 The concert took place in the multi-purpose spaces of the Kursaal theater in San Sebastián. The peculiarity of these spaces is that they are modular, therefore they can be configured in different settings just by repositioning their walls. In this occasion, we used one of the three “standard” spaces. 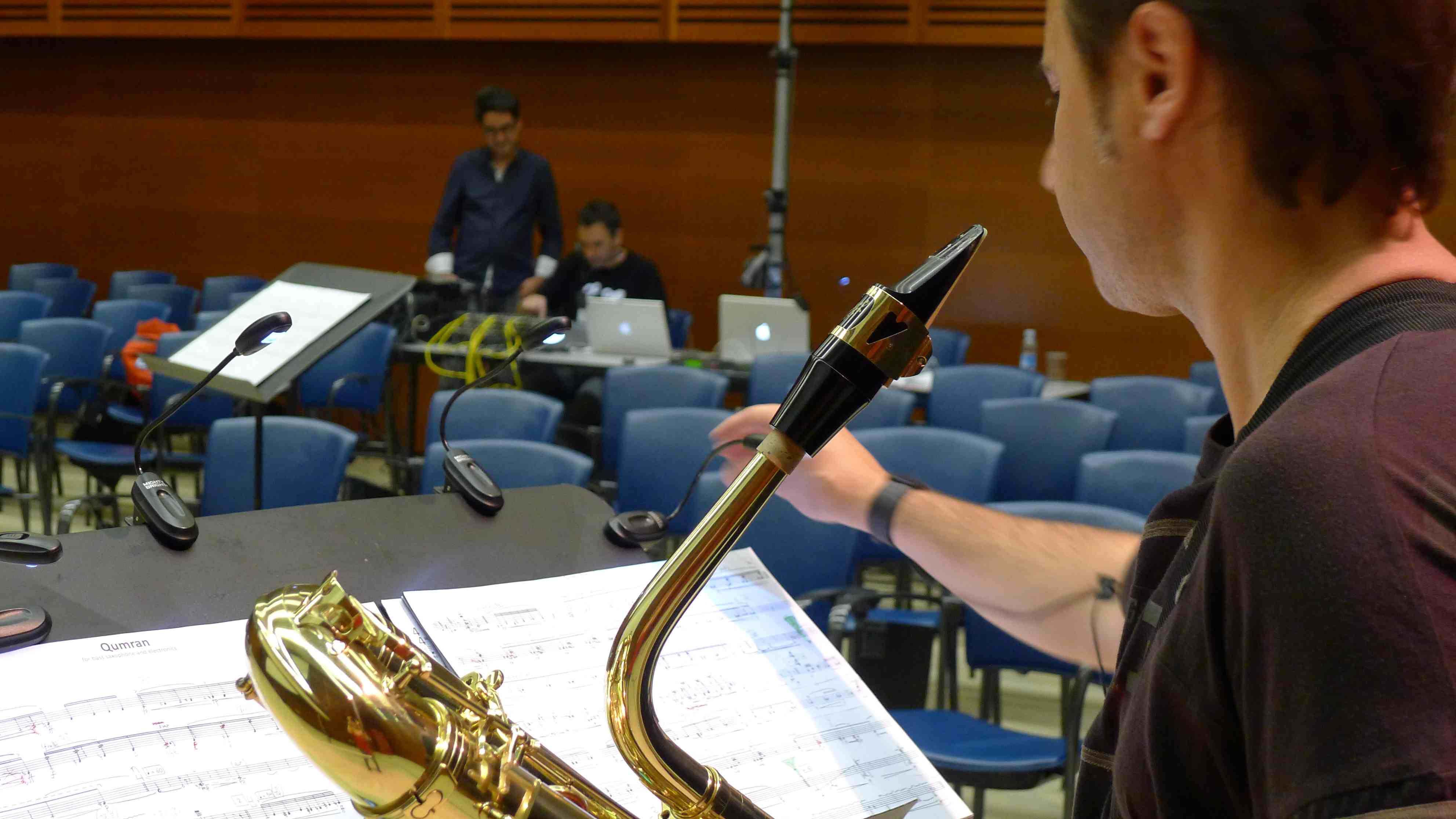 Regarding the sound sources, from the very start we used the four fixed speakers in the room. These were suspended at a height of around 3.5 – 4 meters (represented as crosses in the diagram below). At the lower level we used a set of 4 Genelec studio monitors, considerably powerful and quite neutral as for frequency response, together with two monitors on the sides. As we could not get a sixth Genelec monitor, we decided to install the two side monitors, of a different make and model, in pairs (represented in black). Under the 6-meter long and 3.5-meter high projection screen, we positioned a discreet subwoofer, just about as small as a flamenco box drum. We used a high power projector as well. The complete set, in a hall designed for an audience of about 120 people, was perfectly balanced, acoustically and visually. 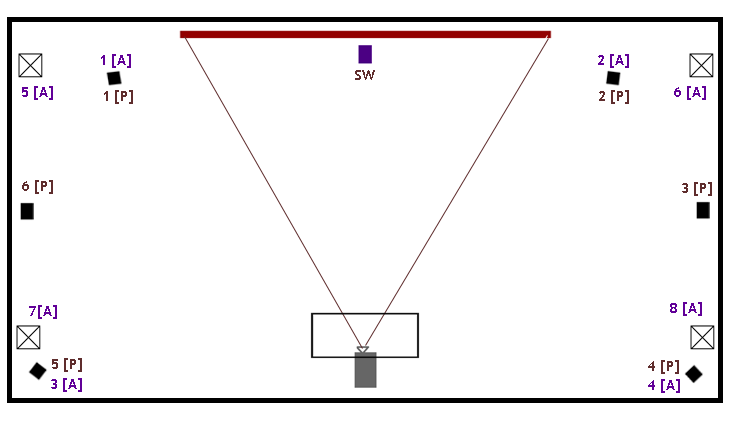 While the speaker set was definitely heterogeneous, the effect was surprisingly suggestive and enriching. We kept the original idea of distributing four and four speakers in two levels; but this time we played with the height rather than with the device’s characteristics. This set up created a feeling of “in and out” besides the “up and down”. The possibility of creating this acoustic independence livened up and enriched considerably the textural peculiarities and spatial patterns in Posadas’ and Arranz’s pieces.

The reason why we used 6, instead of 4, additional sources, plus subwoofer, was that we aimed to cover the necessities of both pieces by using a minimum number of elements. While Posadas’ piece requires a diffusion of 6 surround sources, distributed as much balanced as possible around the hall and in a clock-wise disposition (see diagram), Arranz’s piece features a distribution of 4 sound sources above and 4 below. Posadas uses 6 sources localized in the lower level section, referred with the letter P, while Arranz ignores the side sources 6 [P] and 3 [P], used only in Posadas’ work, and takes up the four high-level exterior sources, 5-8, referred with the letter A. 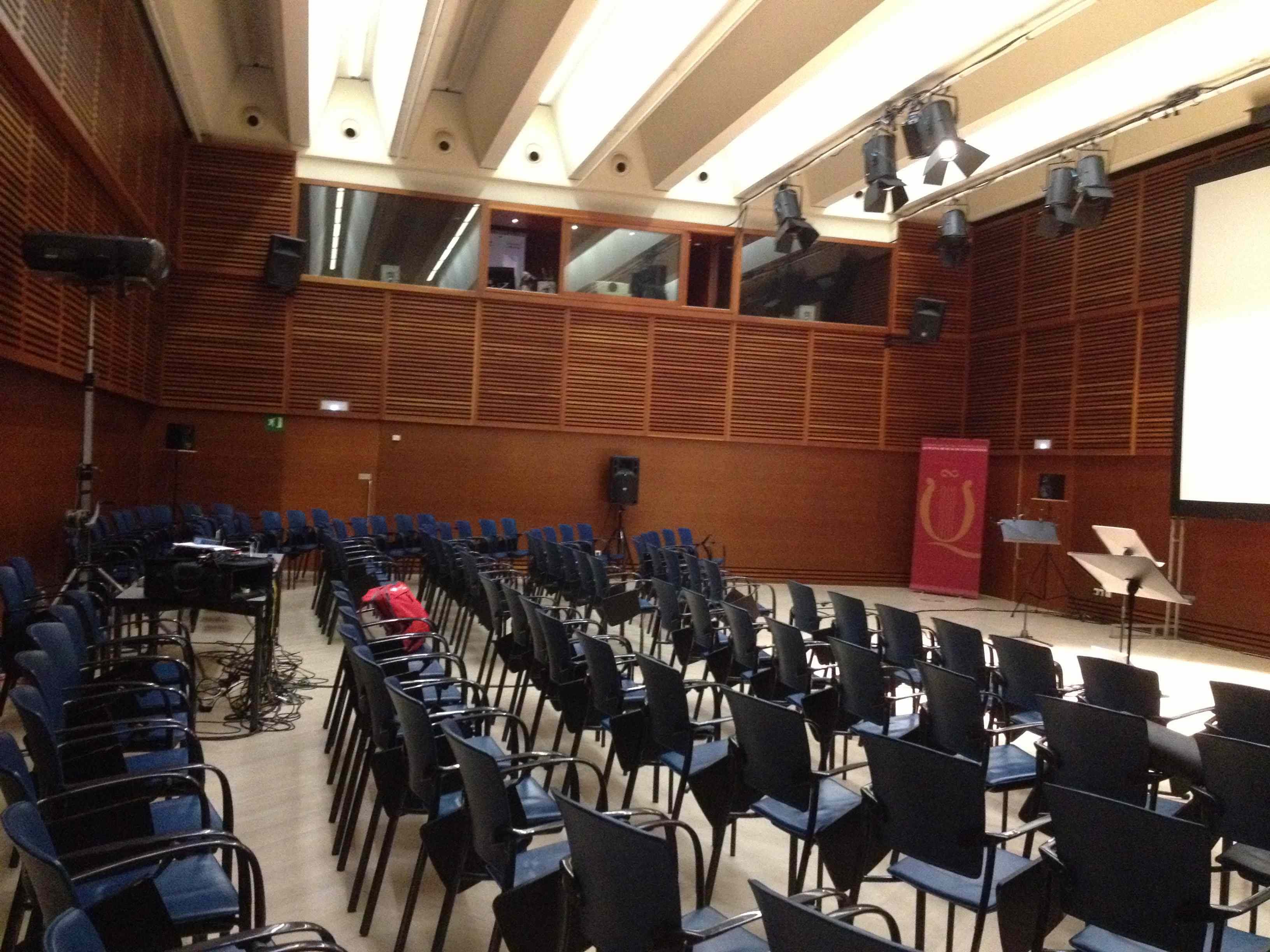 We will concentrate now in Posadas’ piece: a beautifully crafted, deeply emotional work. Althought the composer does not indicate it in the score, the balance in the sources’ distribution is fundamental.  The electronics in Fúlgida niebla de sol blanquecino proposes the total fusion of all sound parts. In fact, the composer specifies in the score notes his wish to achieve a total fusion between dynamics and applied reverberation. Quoting the composer, “saxophone and audio files of electronics must produce an as homogeneous as possible sound. Reverberation and level of amplification must look for this”. Naturally, this task fell in the first place on the adaptation of the saxophone’s sound to the acoustics of the hall, which were of a rather friendly dryness, just lightly wet due to the wood it was built of.  Juanan designed a small and very discreet reverberation preset with hardly any predelay and prolongation, whose impact did not produce an illusory resonance, but modified the instrument’s timbre instead. What is more: the aim was not to modify the saxophone’s timbre at all, but to create the illusion of “reaction” of the space. It was great: we had never heared something this fine, delicate, elegant and good aimed, and yet effective at the same time.

Once we stablished the hall’s “artificial resonance” level by means of the reverberation of the saxophone, which we reinvented by playing with the reverberated signal level and balanced through the sound sources, the next step was to balance this with the electronics. The composer specifies that “in case of very dry halls, (reverberation) may be applied to audio files as well”. Here we somehow inverted the relationship between instrument and electronics, inasmuch both parts were naturally balanced thanks to the acoustic response created by Juanan, and not so much to the electronics, whose signal was very lightly wet just as a reference. The result was a greater clarity in the location of the sound sources, obtaining a sharp response, which contributed even more to merge the parts with the electronics, while emphasizing a certain spatial independence. 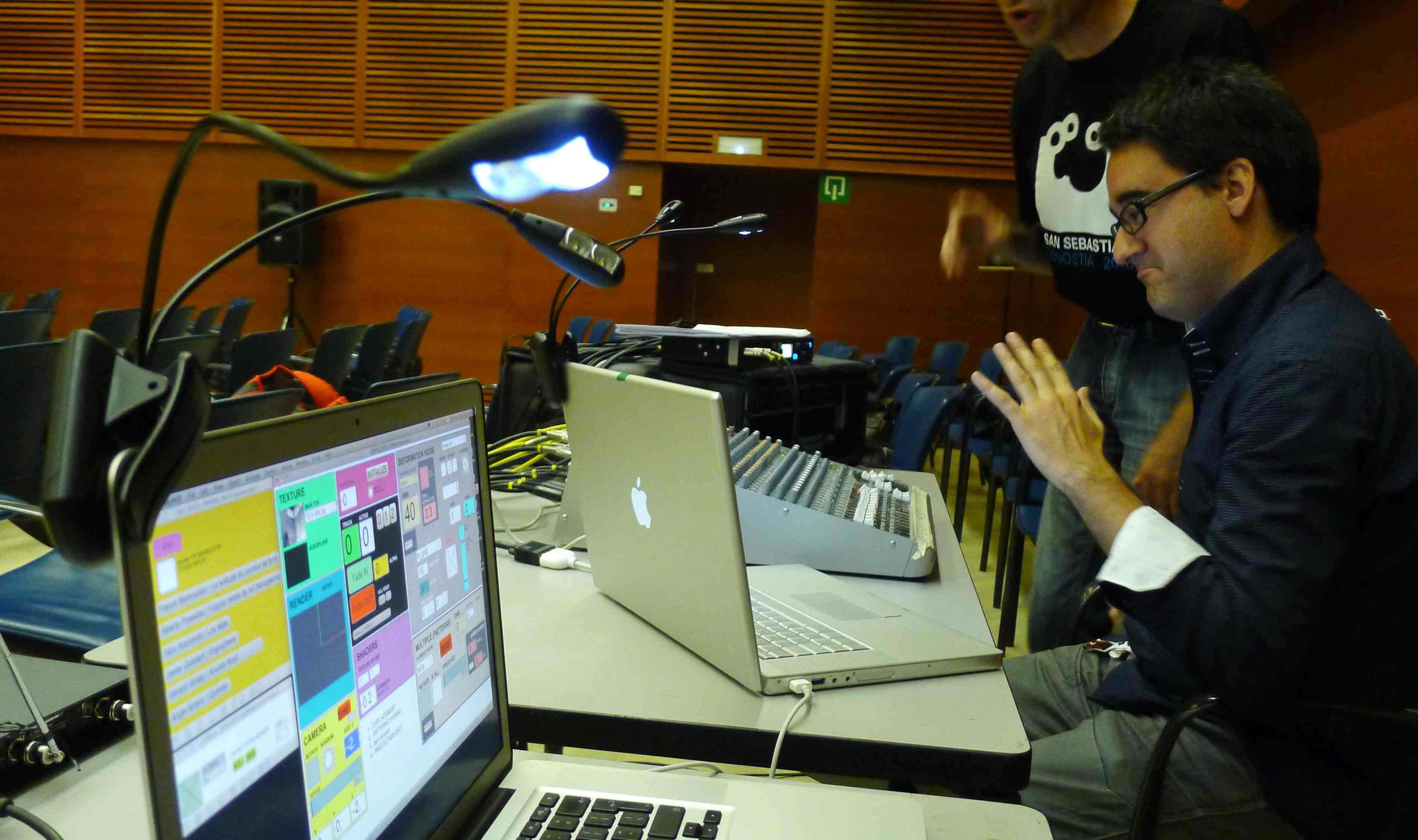 As for the performance strategy for the piece, and, more specifically, the dynamic level for the electronics, two priorities were stablished: the fusion among the parts and the achievement of dynamic forcefulness while avoiding shrillness. To this end, we took two reference points: the beginning of the piece on the one hand (fusion), and the dynamic climax (pedal number 13 and onwards, and another moment around pedal number 31, if remembered well). Once we stablished the thresholds, we drew a smooth dynamic curve starting from -3dB at the beginning of the piece, until almost +6dB aroung the central section, falling back smoothly to -3dB until pedal number 39, the point at which the electronics dissapear. This strategy was really effective and, while at the same time the electronics did not overcome the bass saxophone, and the other way around, due to any non-musical reason.