Everything is curved. So did my dear colleague Casper Schipper define his first listening to Extrusion, the second electronic piece from a series of four works, which I expect to finish in 2011. Maybe it is because of my renewed interest in Baroque aesthetics, maybe because of a more aware use of the spatial/temporal qualities of the materials, certainly it results in a more flexible approach to time than even in my previous electronic piece, Electronic Study. The piece was composed thinking about the features of the space in which it has been premiered, the Schoenbergzaal of the Royal Conservatory of The Hague. To a certain extent, in Extrusion sounds seem to be closer to the limits of the space they inhabit. I have always found especially suitable the apparently austere concavities of the Schoenbergzaal, an architectural compound of solid bricks and wood. In order to develop spatial gestures of sounds in a physical way, the hall is not hugely big as a large concert hall, but long and wide –and high- enough as to magnify some sonic gestures, which draw a completely new impression of the space fed by the music. So, space becomes a sort of instrument just in the moment when you try to modify the perceptions that the audience have about it in a virtual way along a deconstructed timeline.

I began to think about this piece last November, making some sketches about general descriptions, including some movements of sounds that could have structural implications later. The origin of the title was totally anecdotic, but the subsequent construction was not. Our video artist was working in a text on engineering for specific industrial processes, and we were diverted by the weird linguistic expressions that generally appear in this kind of texts. One of these terms was extrusion, and this term somehow reached my imagination. To extrude something is to give it form by means of industrial or mechanical processes. So I found it interesting to extrapolate something like this to a discourse on electronic sounds and to a quasi-mechanical framework. 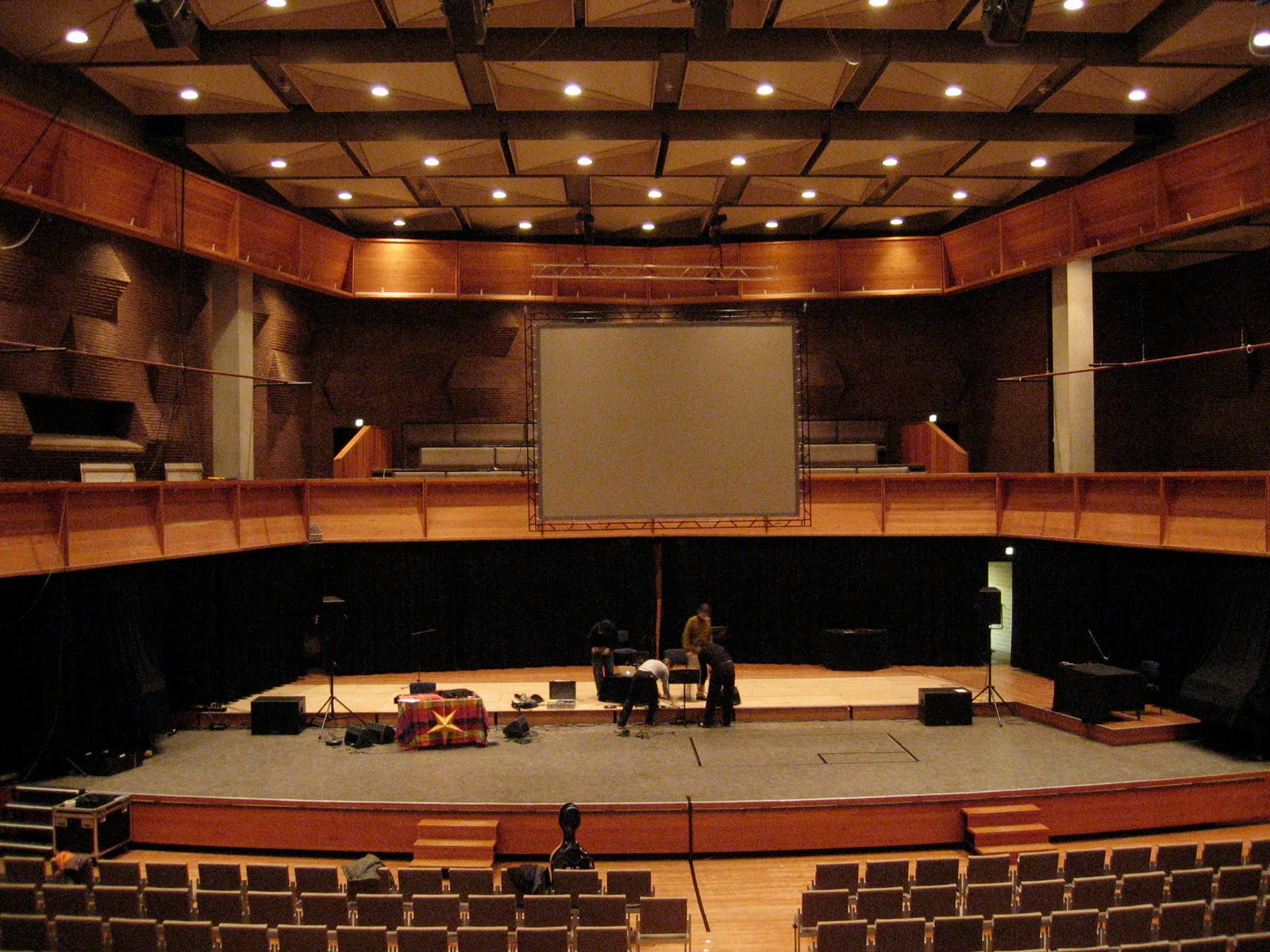 In Extrusion there is an idea of layout in terms of structural/spatial elements split in several levels, but also a strategy on the movement of sounds in terms of their dynamic/temporal nature; actually these two approaches, the spatial functionality and its articulatory flexibility, are connected to each other. In other words, it could be said that this articulatory flexibility is understood in the physical space (the hall) as well as in the discourse -the music itself-, as the opposite ends of the same mental territory. Concerning the use of the parameter ‘height’ as a structural strategy, the space of the hall was understood in two levels, top and bottom. Eight sound sources were set around these two levels: at the bottom, a quadraphonic conventional setting with their respective sub-woofers was designed; at the top level, around the balconies, a rhomboidal setting of speakers crosses the quadraphonic setting, if you take the ground-plan as a reference. It means that the upper sound sources complement just the centers of the quadraphonic spaces, so that everything conforms a sort of eight-pointed star. At the bottom were set the routes 1-2 (front left-front right) and 3-4 (rear left-rear right), and at the top were set the routes as follows: 5-6 (front-rear) and 7-8 (left-right). Stereo tracks were used for all the channels, with the possibility of using preset panning and diffusion to create different spatial environments: static sounds, which express illusionary polyphonies around the space by means of alternation, dislocation and fragmentation; panned sounds, which define physical movement and locations of sounds restricted within certain selected stereophonic areas; and finally, diffused sounds, which move around the whole concert hall according to some surround parameters. For the latter, two independent tracks were used exclusively at the bottom level, while in the top level only panning was chosen as movement pattern. 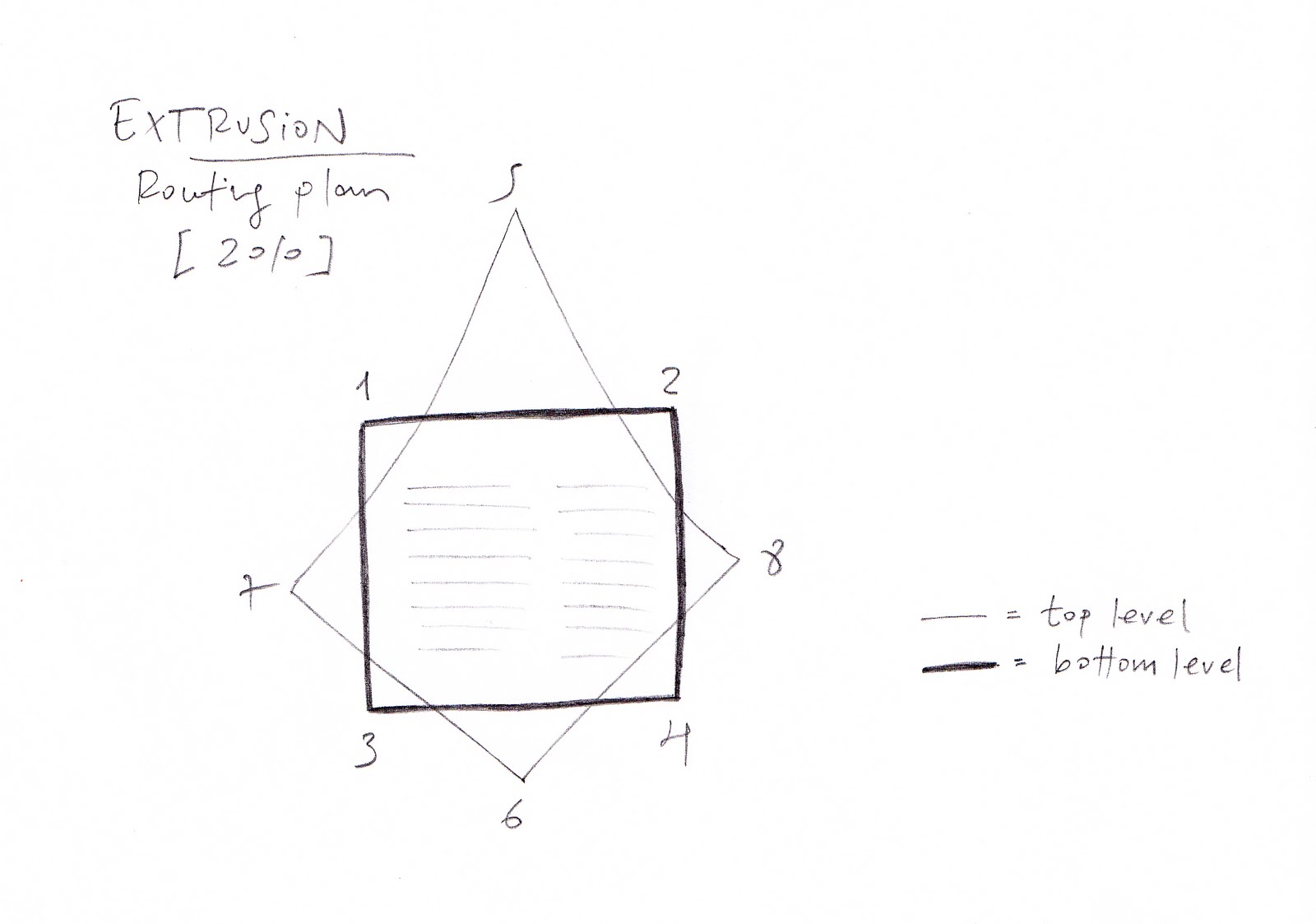 Regarding the structural function of materials, some solid quasi-mechanical materials that appear at the bottom level articulate the work in both aspects, the physical distribution of sounds as well as their temporal (in)coherence. These materials are basically in charge of creating a solid cast, each time more elastic, as a sort of machinery that produces the casting for other softer sounds. This machinery develops at least two aspects: on one hand, it represents a collection of milestones along the discourse, which become more and more separate from each other, and also more separate individually from its gravitational center, whose tendency is finally merge with the background material; on the other hand, this machinery produces a progressive displacement of its elements, revolving around a sort of inner spatiality. This last aspect is quite important, because we obtain from this deconstruction first of all a multiplicity of viewpoints of the same object, and secondly, a (re)creation of the external/physical space that contributes to play with different illusions of the hall by using slight differences of spatial resolution. By decomposing and dislocating temporally –dynamically- the elements that conform the basic mechanical object, which at the same time represents the core on which the whole discourse is based, we drastically manage to move a stable, spatial conception of time. At the same time, such a conception uses inner temporal differences as a vehicle for dealing with an impression of physical movement, which somehow is like if the entire space was moved around, like if you were able to turn the walls of the hall at once. That is an important feature.
But other important features, dealing with other kind of spatial/temporal conceptions, are exploited in Extrusion. While some solid, mechanical materials appear to articulate the discourse, other materials result extruded by the action of those. And the tendency of these materials is to behave as capricious elements that curve the space they walk in pointed by those, as a result of a virtual post-molding. Another clear tendency of these materials is to behave out of the framework in which they were originally situated, invading certain territories by selecting different performing areas and evolving towards some flexible expectations of time, understood as situated out of the margins of something pre-compositionally originated or deliberately pre-organized. Another interesting resource is to use very compact materials with a high capacity for cohesion, and make them travel thirty meters across the space by using a discrete panning. This feature was something especially difficult to deal with in a 25 m2 studio, because you cannot obtain a clear impression of the spatializations with such materials, but as soon as you zoom into such sounds in the real concert situation, a certain sensation of inner movement is produced. I decided that this kind of movements should be produced basically at the top level, as a sort of cloud-like masses of sounds.
The piece was programmed and composed on Max/MSP, using basically FFT processes, granular synthesis and buffering techniques. Also, there are two specific moments in the piece, where Stockhausen´s voice appears, saying a segmented sentence apropos the basic idea of the Helikopter Quartett, and how his primitive childhood dream of flying is connected to his own music. The second appearance of Stockhausen’s voice was processed by merely chopping the sentence and reorganizing it in several channels. But for its first appearance I used at certain moments another interesting tool: pv – c – fp, a toolkit designed and implemented in Max/MSP by Johan van Kreij. This application includes, in a single kit: phase vocoding, convolution synthesis, spectral filtering, pitch shifting and frequency shifting. I found it very suitable for treating the human voice in this concrete passage for three reasons: the enormous creative possibilities on scrutinizing a short sample few seconds long; secondly, because of the application´s capability of extracting those hidden features produced during the normal articulatory processes of the human voice, and last but not least, due to my own pleasure of experimenting with such a tool.