Soundpainting is a language of signs created at the 80’s by the Newyorker musician Walter Thompson in order to compose pluridisciplinar performances real-time, given that it is oriented to musicians, dancers, actors, poets and/or visual artists.
This language comes up from the idea of conducting and giving form to the improvisation during its execution. The conductor or soundpainter addresses to the artists by means of gestures that mean actions. A soundpainting composition is the result of the comunication of the soundpainter’s signs and the performers’ responses within a live, interactive process. 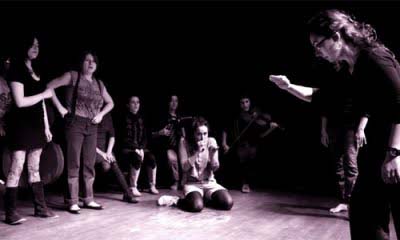 Beatriz Franco Mielgo is mentored in soundpainting at Paris and Belgium by the creator of soundpainting, Walter Thompson. Once she finishes studies in classical piano at León and Salamanca, she moves to Paris in 2004 with the aim of exploring contemporary music, improvisation and scenic arts, participating in several courses. She learns mimo body techniques from 2007 at Hippocampe. Nowadays, her artistic activity is centered around pluridisciplinary spectacles, improvisation and soundpainting, co-founding the Trafic collective in 2009.